Tours Offer Unique Glimpses of Seattle. As tourists, when we visit a city, it is always interesting to check out the various tours of that city that are offered. Many cities have tours that are similar to basically any other city. Seattle, Washington, however, is different from most other cities. Not only do they have tours that really can’t be compared to anywhere else on earth, but they also have tours that are delightfully fun and entertaining in and of themselves.

One of the more interesting and most popular tours of Seattle is called Ride the Ducks of Seattle. This tour takes you on amphibious World War Two vehicles throughout the city giving you a great tour of Seattle from land and water. The tour lasts about ninety minutes and will be unlike any other tour you’ve ever likely to take again.

The second tour of interest is a toss-up with another tour for my favorite land excursion. I’ll tell you about both; hopefully, you will try both and decide which one you like best. This would be called Bill Speidel’s Underground Tour. This tour is strange, hilarious, and fun all at the same time. It is also shocking and disturbing in ways too. 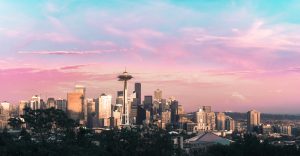 The idea that a city was built basically on top of itself is a little strange, but to discover that the original city doesn’t ruin makes the tale even stranger to those who don’t know the story. The story is great and the telling is even better. The only drawback to this tour is that young children might find it either disturbing or boring, or both. So be prepared to entertain. The terrain is also not suitable for strollers if you have very little ones.

My next favorite tour is called Private Eye Tours. This tour takes you to scenes of crimes some solved, some unsolved throughout the city. There are three tours that you can currently take. Each one costs $25 per person and lasts about two and a half hours, except for the ghost tour, which lasts three hours. The different tours are Queen Anne Mystery and Murder Tour, The Capital Hill Mystery and Murder Tour

Advertisement
, and Haunted Happenings, which is also known as the Seattle Ghost Tour. Each of these tours is great fun for those who are not squeamish and make a great gift for a true crime fan or someone who loves those old fashioned detective novels.

If you are interested in whale watching there are several excursions you can take. First of all, during the height of the season (June and July) you have an excellent chance of seeing whales if you watch from the western side of the San Juan Islands. This is probably the best way to see whales from land. Beyond that, you can take several chartered whales watching excursions. Here are a few of the companies offering whale watching cruises:

San Juan Safaris (you can also do a five-hour Orca search by kayak with this company), Salish Sea Charters, Island Adventures (this tour offers a discount for early birds and they offer a whale spotting guarantee), and Maya’s Whale Watching Charters, which for a slightly higher price gives you a much smaller boat and puts you much closer to the water for a better view of the whales.

Tours are a great way to get the most of your vacation experience. I hope I have showcased some of the more unique and colorful tours that Seattle has to offer. There are the general tours of the city and walking tours as well, these are just the tours that stand out and leave an impression. Please give us your worthful feedback about this article “Tours Offer Unique Glimpses of Seattle”.