Amsterdam is also known to be a haven for hippies. It has moved since then to be a bigger economy and a successful cosmopolitan business center. The hippie era was the 60’s and 70’s when Amsterdam got its name of hippie haven from free for all culture. Most people visualize this expired idea even today.

The new economy has brought prosperity all around evident from growing business zones and transformation of the general landscape surrounding ancient townhouses and canals.

With about 3/4 of a million the populace, the transformation of Amsterdam from a hippie haven to a buzzing business city is not yet complete. The culture of free-thinking and collective living has not yet gone away. Only the free culture is not an offshoot of semi-legal toxic and exotic plants, but a by-product of successful economic growth today.

Most Prevalent language of Amsterdam

Today’s Amsterdam does not welcome the hippie youth that thinks getting high on the hash is a part of the city’s culture but prefers youth that has a spending capacity. It’s not that one can’t smoke hash but Amsterdam has slowly transformed itself into a city where you can smoke hash and enjoy the city without big damage to the pocket.

Amsterdam historically has been a major trading post during the colonial times, the reason why you will find scattered townhouses around the otherwise neatly aligned canals. These were made by the then wealthy tradesmen. Today these houses mostly house smoke shops, exotic nightlife, and a string of brothels. This historical irony has been taken in stride by the local populace and by a collective decision to license the brothels and the sale of the hash in licensed coffee shops. These are a major tourist

It would be wrong to think that the locals are addicted or are always high on marijuana. They are busy planning and remodeling a few townhouses into various centers of innovative business, they are busy biking around or tasting ethnic food or just relaxing watching life from the sidelines reading newspapers on a sidewalk cafe. 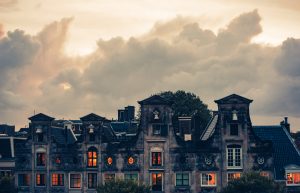 English is the most prevalent language of Amsterdam

has its own charm that casts a spell when you see the 1200 odd bridges lighted up over 150 odd canals. The glory of Amsterdam charms you further when it emerges from the mist in the mornings. The days could not more perfect for a visitor when he visits the flower market that floats, Rembrandt Museum, Jewish Historical Museum, and the obvious social joints like nightclubs, brown cafes, etc.

English is the most prevalent language of Amsterdam; it is spoken fluently by a major portion of the populace. The basic attitude of people here is very friendly and carefree, as much that one could chat up a local in course of one beer.

Each province of the Netherlands has its own tourist organization strewn around with multi lingual attendants. These Associations for Foreign Travel, as they are called or in short VVV (fay-fay-fay), book accommodations, help to make travel arrangements, and keeps the visitor abreast with the latest programs. They also publish Amsterdam Day by Day, a monthly magazine stating programs for the month for a mere $2.50.